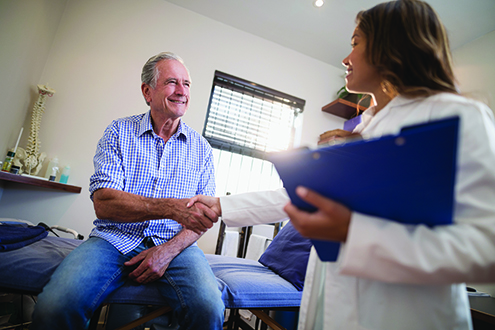 Therapists have a significant history with worker and population health. In the 1930s work hardening concepts were developing as occupational therapists developed industrial therapy programs for patients in mental hospitals. Early concepts of job matching were developed as jobs were analyzed for skills, and its physical and mental demands, and patients were matched according to therapeutic goals.1 Physical therapists made strong advancements in this arena in the 1980s as pioneers in the field, including Susan Isernhagen and Keith Blankenship, further developed protocols for functional testing in the form of Functional Capacity Evaluations (FCEs). These FCEs were widely accepted and used by both professions for reporting on an individual’s work ability and creating goals and measurements for work hardening and work conditioning programs. Today there are numerous versions of FCEs that incorporate both standardized and job-specific formats.

Both fields also have historically had roles to play in wellness and population health, as defined in their respective practice guidelines. Health and wellness at large, and also wellness specific to the workplace, are both referenced. For example, physical therapists are called upon to participate in prevention and wellness activities, including health screenings and health promotion. These activities are recognized for their importance in helping to decrease healthcare costs. Intervention, prevention, and the promotion of health, wellness, and fitness are a vital part of the practice of physical therapists. As clinicians, physical therapists are well positioned to provide services as members of primary care teams.2

Worker Health: On the Job

The broad spectrum of the health of a worker on the job includes management from the point of employment, covers the hours that are spent working, and extends through the point of termination. Considering the aging workforce population, that point of termination is often retirement, and the age of retirement continues to increase. Evidence indicates that as people age, the rate of fatality on the job increases. A leading injury is falls.3According to Safety & Health Magazine’s review of the Bureau of Labor Statistics (BLS) latest release on Employer-Reported Workplace Injuries and Illnesses, of the 5,147 on-the-job deaths that occurred in 2017, 775 occurred among workers age 65 years and older, an increase of 87 from 2016. This represents the highest proportion for that demographic since the census began. Over the time period of 2016-2026, the projected overall rate of growth of worker age groups is expected to be the greatest in the 65 to 74 age group and the 75 and older age group.4